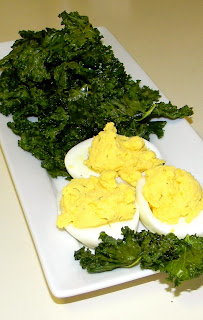 Lunch today included Kale Chips and Deviled Eggs. The Kale Chips were a desperate measure because I had some kale leftover from making soup earlier this week and didn’t want the remainder to go bad. I did find one recipe that called for a 400-degree Fahrenheit oven but knew that was crazy ~ too hot!

Instead, I looked further and found a simple recipe that called for a 300-degree oven and that sounded about right. I’m giving you a link to the Kale Chips recipe, and will tell you what worked for me.

It’s important that the kale is clean and dry before it’s baked. I had already prepped the entire batch when I was making the soup, so I was good to go. I pulled all the leaves from the stems, broke the leaves into smaller (not too small) pieces and placed them in a large mixing bowl. 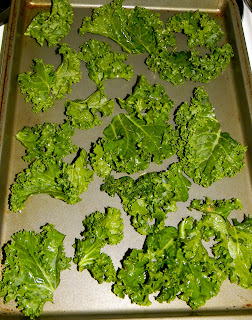 My oven is small and so are my cookie sheets, so I divided the kale between the two of them--single layers, not touching--and put one sheet on each shelf of the oven. After 5 minutes, I reversed them and switched shelves. Then cooked for 3 more minutes. A minute or two more may be necessary, but watch them carefully. You want them crisp, not burned.

In this photo the Kale Chips are almost done, but not quite... 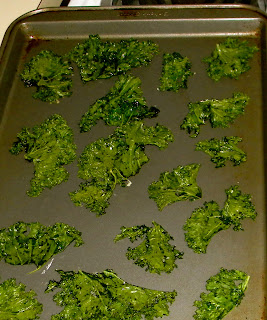 This recipe for Deviled Eggs includes the best instructions I’ve seen for hard-boiling eggs. As directed, I bought them to a full rolling boil, then set the timer for 9 minutes.

After nine minutes, I set the eggs under cold running water for two minutes and they were perfectly hardboiled and easy to peel. Where there is a choice of lemon juice or vinegar, I used fresh lemon juice. 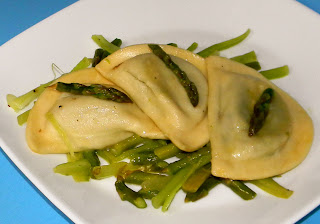 TV TRAY
As a single person, I sometimes (often?) take my meal to the living room and eat off a TV tray while watching a movie or documentary. TV tray meals are usually cobbled-together with whatever happens to be in the kitchen, no measurements recorded.

Store-bought perogies and fresh asparagus, sautéd in EVOO and butter

Posted by Kathleen Richardson at 11:46 AM