The Perfect Pie Crust For A Strawberry Heart Pie 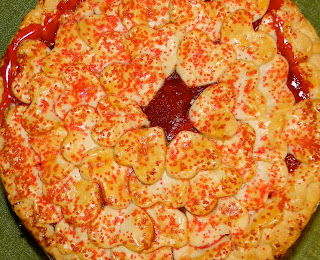 I may have missed out in the past, but nevermore! This is THE pie crust recipe. Absolutely spot-on perfect ~ tender and flaky! And the simple strawberry filling... delicious! Just right especially for spring when strawberries are ready for picking and if you don’t pick your own, the stores have them at the best prices of the year.

Ree Drummond who writes The Pioneer Woman blog, received the PERFECT PIE CRUST from one of her readers, Sylvia L, who admits that this recipe has been around for a long, long time and she can’t remember where she originally got it. I know I’ve seen this recipe, or a variation of it, in past years, but I never tried it because I was turned off by the idea of adding vinegar and an egg. (My pie crust typically consists of flour, salt, butter and water.) 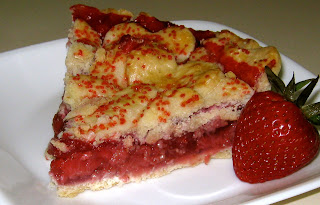 You won’t believe my first experience making this crust yesterday when I wanted something other than the store-bought crusts suggested in Miss Buttercup’s STRAWBERRY HEART PIE.

Because my hands are slightly arthritic, I now use a Kitchen Aid mixer and Hamilton Beach food processor for many of my cooking projects, such as bread and pie making.

So, I chose to mix my pie crust with the HB food processor. Let me make it clear that I’m an old-time pie maker--keep every ingredient cold, as little handling of the dough with (warm) hands as possible and work quickly.

As you will see when you look at the recipe, there is little opportunity to keep the pie dough cold during the mixing process, unless you count the addition of the cold water. I’m used to using cold, hard butter and water kept cold by adding ice cubes.

You’ll find the recipe with detailed instructions at The Pioneer Woman. Meantime, I’m going to give you a play by play of my experiences and hints for successful preparation of the PERFECT PIE CRUST... 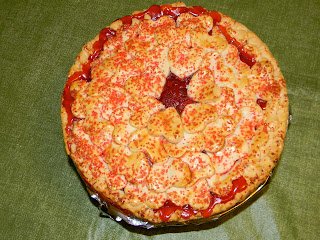 1. Step One is to mix the Crisco vegetable shortening and flour. Here’s where it seemed to go wrong for me. A few pulses with the food processor should have given me a mixture resembling “a coarse meal”. Instead, the dough looked like a huge ball of glue and I couldn’t imagine adding any more liquids.

2. I persevered, using a few more quick pulses to stir in the beaten egg, cold water, vinegar and salt. Glue, even more gooey.

3. Removing the mixture from the food processor revealed that the dough wasn’t quite as gooey as it had appeared, but still way softer than any pie dough I’d ever prepared. 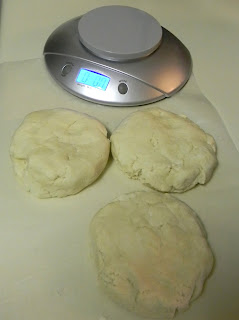 4. I used digital kitchen scales to measure out three equal portions. All three “discs” went into plastic bags, one being labeled and frozen. The other two were refrigerated because it would be several hours before I needed them. 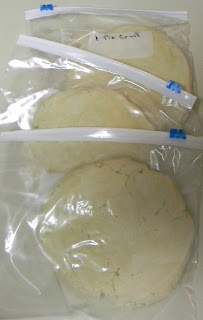 5. Don’t be afraid to use enough flour to keep things from sticking, ‘cause this is a much stickier dough than most.

6. I don’t recommend rolling flattened dough around the rolling pin to transfer it to the pie pan. Mine stuck to itself and I had to start over. Decidedly annoying.

7. Bottom crust in pan, covered with plastic wrap. Refrigerate again, while cutting out hearts. Meantime, the filling is made and cooling to at least room temperature.

8. See No. 4 below about cutting out hearts.

As for Miss Buttercup’s STRAWBERRY HEART PIE, the recipe is pretty straight forward...

1. For my 9” pie, I chose to use four cups of strawberries (measured after cutting into chunks). Next time I’ll use at least five. If I use a 10” pan, I’ll use six cups, and don’t worry, the pie crust will work for this larger size, too. 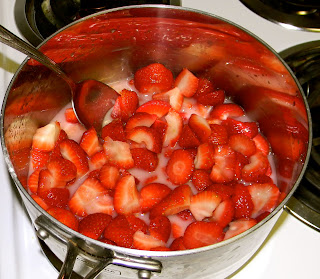 2. Out of my four heart cookie cutters, I chose the next to the smallest, trying to match what’s in Miss Buttercup’s picture. She probably used the smallest one. She has more patience than me. 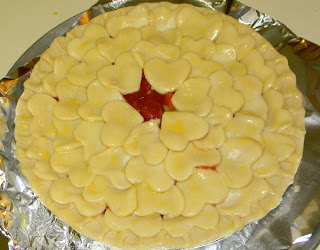 3. The recipe calls for one egg yolk for an egg wash that was applied to both sides of each heart. I used the whole egg and had more than enough to complete that task.

4. Whether you freeze or simply refrigerate your dough to chill it (a MUST!), I suggest taking only one-third or one-half the disc out of the frig at a time when making the hearts. When this dough warms, it’s not easy to handle the hearts without destroying them. 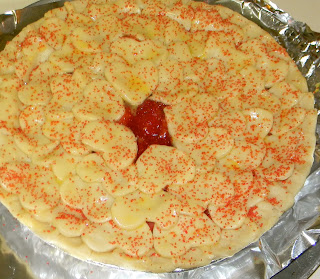 5. About the sanding sugar: I had colored decorating sugar (which is slightly larger grains than regular granulated sugar) and thought it would be pretty to use the red. It is pretty, but I probably won’t use a colored sugar again because it distracts (or is it detracts?!) from the heart shapes.

So, there you have it. An absolutely beautiful, tasty PERFECT PIE CRUST and a STRAWBERRY HEART PIE. This recipe is definitely a keeper and I can’t imagine ever using another pie crust recipe. 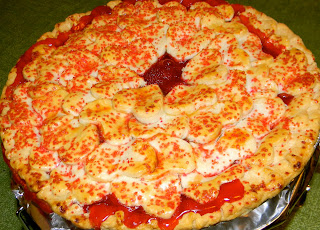 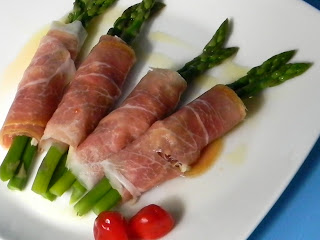 As a single person, I sometimes (often?) take my meal to the living room and eat off a TV tray while watching a movie or documentary. TV tray meals are usually cobbled-together with whatever happens to be in the kitchen, no measurements recorded.

Posted by Kathleen Richardson at 12:11 PM