Chocolate Chip Cookie Birthday Cake And A Look At Past Cakes 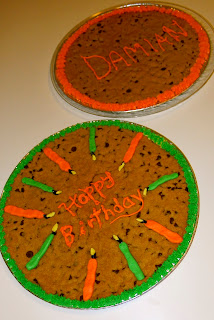 Happy 10th birthday to my grandson Damian. Each year he and his younger brother tell me what kind of birthday cake they want. This year Damian asked for a giant cookie!

I have to admit to cheating. I bought a Betty Crocker 17.5 oz. Chocolate Chip Cookie mix and substituted 1/3 cup oil and 2 T. vegetable oil for the butter, which made for much easier spreading in the 12” diameter pan. First I tried spreading with a large spoon, then with a regular tablespoon. Finally I settled on the barehanded spread. 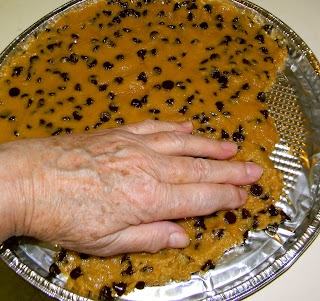 My goodness, the amount of chocolate chips Betty Crocker puts in her cookie mix! With approximately ten friends, quite a few family members and others... I decided to make two cookie cakes and lots of extra cookies. 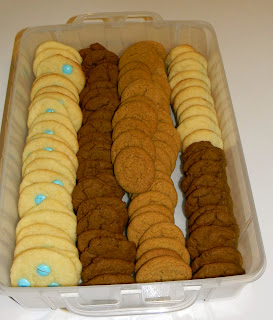 My oven is small so I baked one giant cookies at a time. The disposable pans are rather flimsy, so I slipped a pizza pan underneath for support. I figured that would work okay since it had holes in it and would do a good job of distributing the oven heat 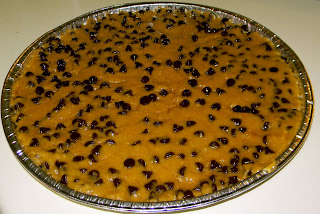 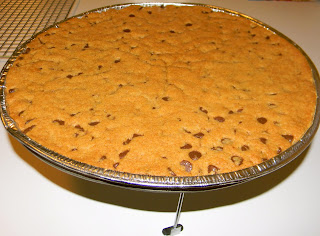 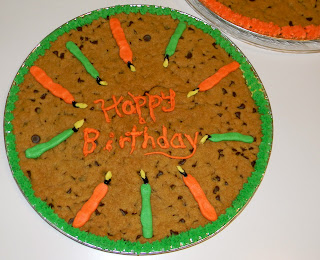 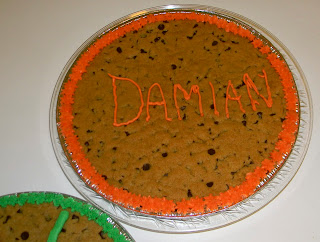 Taking a look back through the years at Damian's birthday cakes from Grandma, I found these.

2009...
On the occasion of Damian’s 6th birthday, a huge family group assembled and I baked four pan cakes. Damian wanted to do his own decorating, including one cake minus the icing. 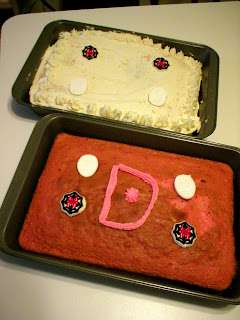 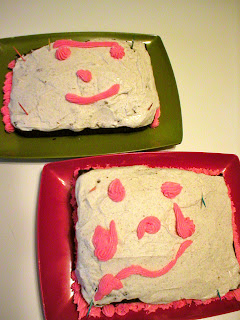 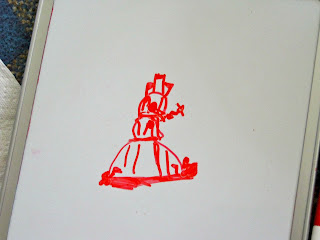 It was a crazy cake! I baked and cut up and assembled the main cake, then Damian and his uncle frosted and decorated. They had a great time and Damian was so happy with his cake. Kids are easy to please because they don’t expect perfection. 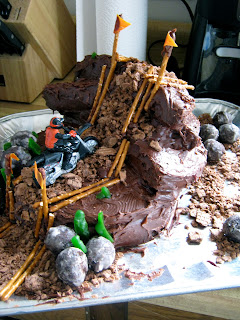 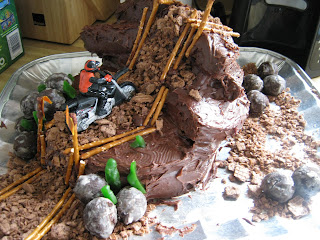 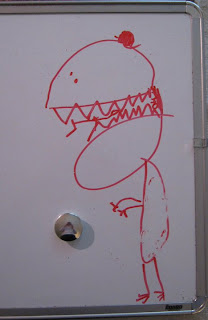 For his 8th birthday, he wanted a dinosaur. I handed him the small whiteboard I kept on the counter and asked him to draw what he wanted. That year I made a cake with a one-dimensional T-Rex. I don’t have a decent photo and it looked to me a big mess, but he was thrilled. He recognized the red dripping out of T-Rex’s mouth as blood and he spotted the little volcanos around the sides of the cake. 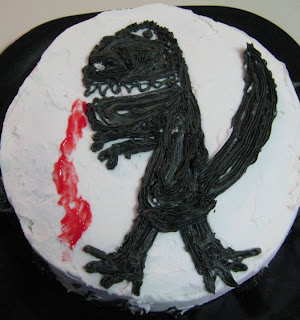 2012...
No cake from Grandma. I was either sick or out of town. Mom and Dad got him his usual immediate-family cake and there was a big party later in the month in the back yard. 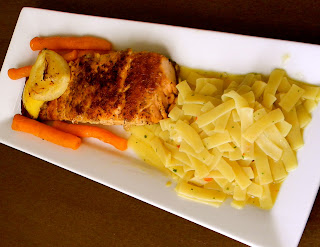 TV TRAY
As a single person, I sometimes (often?) take my meal to the living room and eat off a TV tray while watching a movie or documentary. TV tray meals are usually cobbled-together with whatever happens to be in the kitchen, no measurements recorded.

Salmon fillet, coated with a mixture of fine bread crumbs, S&P and dried dill, pan seared in oil and butter. Fresh lemon juice squeezed on top during cooking and lemon pieces added to the pan. Knorr Pasta Side. Steamed carrots.

Posted by Kathleen Richardson at 4:33 PM