Jackpot! Corn on the Cob, Ginger Peach Slaw, Two Smoothies and a Sandwich 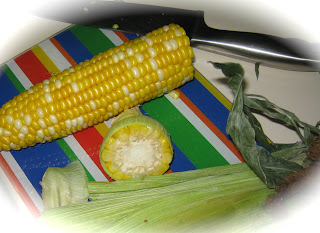 I’m back from vacation and back to cooking. So much stockpiled on Pinterest and dying to be tested and tried.


CORN ON THE COB

Although all five recipes are super and the results are guaranteed to show up in my house again, I’ve got to start out by spotlighting the Corn on the Cob from Instructables.

I’m not talking about the taste. You can minimize with butter, salt and butter. You can doctor up the cooked corn with whatever fancy toppings your heart so desires.

Instead, m’dears, it’s about the ease of preparing the corn. That's right ~ Instructables is giving you step by step directions for the easiest way in the world to remove the husk and corn silk. Here’s how...

Place the corn in your microwave, just as it is ~ just as you brought it home from the supermarket or the farmers’ market or, better yet, your garden. Nuke it for 4 - 5 minutes. Remove it from the microwave, wearing oven mitts. Immediately lay it on a cutting board and cut off one-inch from the thick end of the cob.

Now hold it up in the air by the narrow end (still wearing oven mitts ‘cause it’s hot!). With your other mitted hand, squeeze the cob down and out of the husks. When I did this, I found two -- can you believe that, only two -- pieces of corn silk on my corn on the cob.

Time to eat and absolutely no mess to clean up! Oh my, where was this genius idea all those years when I was fighting with corn silks?? 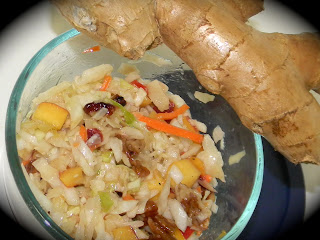 The grands (ages 5 & 9) came over for dinner soon after I returned. They eat most anything I cook and although the bigger one wanted to make pancakes (we’ll save that for a future date!), I forced them to be my official testers for several ideas, including this Peach Ginger Slaw from Beth at eat. drink. smile.

Here are two simple changes I made to Peach Ginger Slaw...

1. Super hot weather these past few weeks made me hesitant to turn on the oven to bake the pecans. Instead, I toasted them in a dry, non-stick pan over a low heat. Watch them carefully and shake the pan often. (After you chop them, carefully separate them from any powdery crumbs as those will burn in the pan. OR, toast them before chopping.)

2. With no rice vinegar in the house, I checked the Internet and found that I could substitute champagne vinegar (which I had) for the mild rice vinegar.

How much did the boys like the Peach Ginger Slaw? The little one doesn’t eat a lot of anything, but the older one took home a container of it, plus a paper cupful that he was eating as he went out the door.

Although I forgot to take photos, I did prepare other foods for the boys, including Asparagus Pesto Grilled Cheese Sandwiches from the grilled cheese guru, Kevin at Closet Cooking.

Prepare the simple Asparagus Pesto, then assemble and grill the sandwich which includes a whole grain bread, butter, Wisconsin Gruyere (I used Swiss) and some of the pesto.


PICK ME UP PINA COLADA 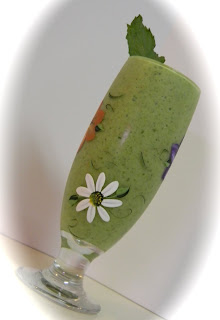 Cory at Zesty Cook has come out with a brand new e-book full of healthy, tasty smoothies and I tried out the Pick Me Up Pina Colada. Absolutely yummy and refreshing.

The slightly raggedy looking mint at the top of the picture is from my garden! 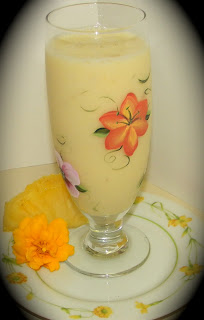 Last but not least, I decided to make a simple smoothie using fresh pineapple leftover from the Pina Colada and fresh ginger leftover from preparing the Ginger Peach Slaw.

I pinned this recipe from gimme some oven on my Pinterest account and was anxious to try it out. Another simple one, using ingredients I often have on hand:


One small change I'll probably make in the future is to cut the fresh ginger quantity from 1 Tablespoon down to 1 teaspoon. For me, a tablespoon seemed too much when I read the quantity and it was too gingery for me in taste.

All in all, a very tasty smoothie!

Now that the weather is finally cooling (really, anything is cooler than 90+ and 100+ degrees Fahrenheit), I can’t wait to get back to baking. On my agenda--Brown Butter Hazelnutella Chip Cookies from my friend Chocolate Chip Uru at Go Bake Yourself.

Posted by Kathleen Richardson at 5:36 PM