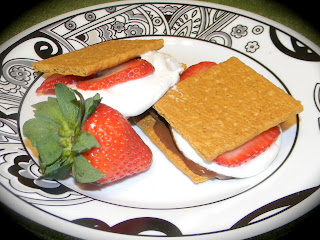 What did I go to Walmart for? I can’t remember but I did end up wandering down an aisle with displays of graham crackers, chocolate bars and marshmallows. One of each item went into my shopping cart. After all, who doesn’t salivate at the thought of melty s’mores.

After supper I walked over the river to Wegmans (No, I don't walk on water; I used the bridge.) and just inside the front doors were the biggest, most beautiful strawberries I’d seen in months. Only $3.49 for two pounds. 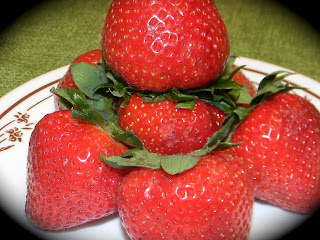 Two pounds is a lot of strawberries for one person to eat, unless quite a few get frozen.

When I prepared to make microwave s’mores, I thought of the strawberries and decided to experiment.

I washed and dried a couple of strawberries, cut out the leaves and then sliced the fruit.

For my first attempt, I placed 3 strawberry slices on each of two graham cracker squares and topped each with a piece of chocolate and a marshmallow. The chocolate melted, the marshmallow got huge but didn’t melt or squish or anything, not even when I took it out of the microwave and placed another graham crackers on top of each. 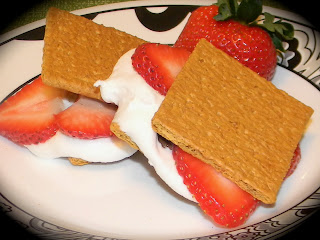 Second try, I got it right by making the s’mores the usual way: one graham cracker square, one small piece of chocolate, one large marshmallow, in that order.

Microwaved them for 12-15 seconds, removed from the microwave, topped the marshmallow (which puffed beautifully and expanded itself to the sides) with three rosy-red strawberry slices, and finally topped it all with another graham cracker square. 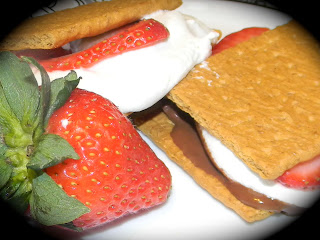 LIKE Step by Step in the Kitchen on Facebook. I'll be posting extra notes and photos there.

Your comments are always welcome here!
Posted by Kathleen Richardson at 1:00 PM