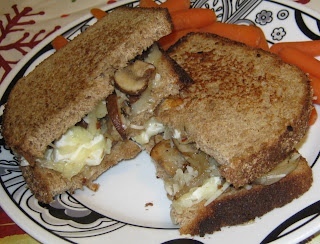 I absolutely love food blogs and am subscribed to about a dozen. Tis the season for cookies and other desserts, with a few “healthy” foods in between, for most of them. I have to admit to the same addiction to sweets for this Christmas season.

Today I’m going to back up a week or so to when I made the most delicious Mushroom Grilled Cheese Sandwich. I first saw this sandwich on Closet Cooking - a blog by Kevin in Canada. Be sure to take a look at what he has to offer. These men sure can cook and not just meat and potatoes!

You should see me when I try out someone else’s recipe. Unless I’m absotively sure I’ll be making the recipe numerous times (such as those that include chocolate), I run back and forth to my computer to find out what the next ingredient is and what to do with it.

Meantime, I have a notebook with me in the kitchen and I make notes on what I do different and what I discover about the original recipes.

According to my notebook, I made this sandwich twice. Kevin, if you can be decadent, I can be even more decadent. I’ll tell you and our readers about it in a minute. Meantime, here’s the original recipe and some photos of my version which is not as gooey, melty looking as Kevin’s. 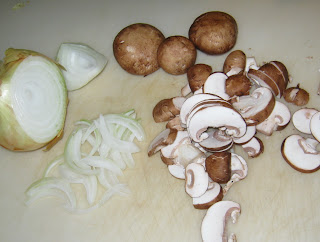 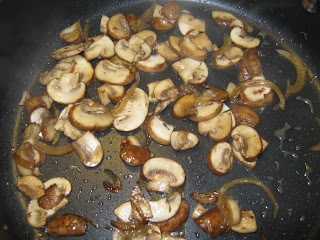 Directions...
Melt the butter and heat the oil in a pan over medium heat.
Add the onion and saute until tender, about 5-7 minutes.
Add the garlic and thyme and saute until fragrant, about a minutes.
Add the cremini mushrooms and saute until the start to caramelized and turn golden brown, about 10-15 minutes.
Add the wine, deglaze the pan and cook until most of the liquid has evaporated.
Season with salt and pepper and remove from heat and let cool a bit.
Mix the cheese into the mushrooms.
Butter one side of each slice of bread and place 2 in the pan buttered side down.
Top each with 1/4 of the mushroom mixture and finally the remaining slices of bread with the buttered side up.
Grill until the cheese has melted and the bread is golden brown, about 2-4 minutes per side. 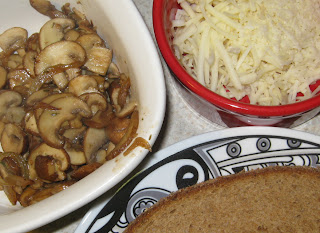 Okay, so that’s Kevin’s version and here are my notes about my first endeavor:

*I made one sandwich the first time using a bit less than half the cheese. That’s a lot of cheese! My bread slices were big, so my version doesn’t overflow as much as Kevin’s did. 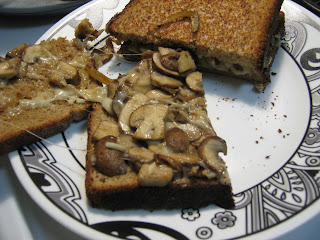 The next night, I made another sandwich. Be still, my heart. I added a bit of crushed red pepper flakes, just a small amount on the end of a teaspoon. I like a bite of heat, not an overwhelming mouthful. I also added a heaping tablespoon of cream cheese. That’s full fat cream cheese, not lite or fat free! 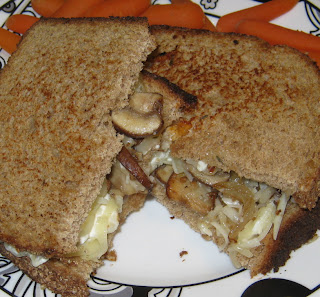 You’ll notice that the cheese did not melt as much as it did in the first sandwich. Probably because I took it out of the pan sooner than before so it wouldn’t get as brown.

So there you have it. If you’re not totally overloaded on coma-inducing, sugary treats and cholesterol-laden entrees, give Kevin’s Mushroom Grilled Cheese Sandwich a taste. Thanks, Kevin, for letting me use your idea!

Step by Step in the Kitchen is now on Facebook. Take a look and "Like" the page. I'll be posting extra notes and photos there.

Visit my other blog ~ Corning NY Step by Step, a pictorial view of the City of Corning NY.
Posted by Kathleen Richardson at 4:05 PM