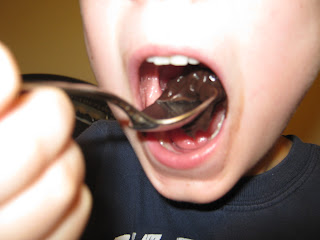 Damian, 8, and Devon, 4 -- my grandsons -- came over last night while Mom and Dad were grocery shopping. I couldn't resist the opportunity to cook with them and take photos for Step by Step in the Kitchen.

My plans included cooking only two items. That's enough. Two kids in the kitchen and one item each should keep things simple. 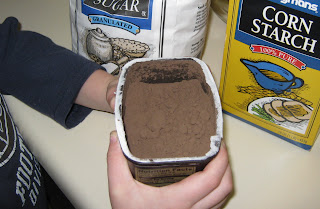 Devon and I made Homemade Rich Chocolate Pudding. You can find the recipe on Bam's Kitchen, a food blog I recently discovered and to which I now subscribe. It's a fairly simple recipe to work on with a 4-year old as long as there is an adult to help keep the cocoa canister upright, remind the child to whisk/stir slowly, and to step in when things get hot! 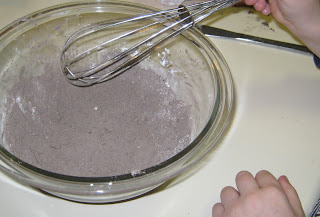 Once all the pudding ingredients were on the counter, I set Damian to work making pancakes with Heart Smart Bisquick, skim milk, an egg and some leftover corn. As Devon and I mixed the ingredients for the pudding, I pulled out the Crisco and a piece of wax paper and explained to Damian that the pan would be hot enough to grease when he could sprinkle a few drops of water in it and see them sizzle. He used a lot of water, starting as soon as the burner was turned on! 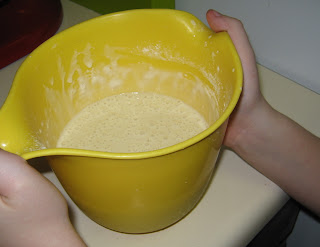 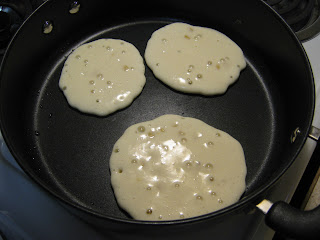 Damian was quite independent in his pancake adventure so Devon and I made pudding. Bam’s directions are pretty simple. However, it’s like juggling when you’re watching two kids at work. The pudding’s first three minutes in the microwave (yeah, it’s that simple) went well, then we stirred and heated an additional minute at a time to thicken the pudding. After a couple of additional minutes, the pudding was getting hot -- though not thick enough yet -- so I did the stirring and Devon set the timer.

I never suspected a thing... 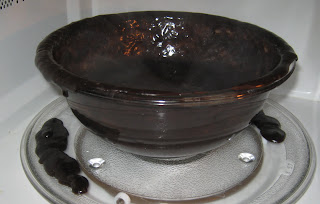 Meantime the pancakes were piling up... 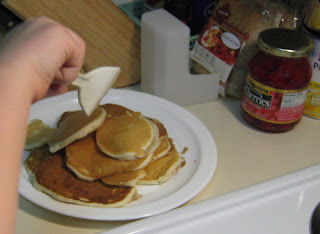 Damian did a darn fine job!

Yum, corn pancakes with real maple syrup. Devon hasn’t quite mastered the art of pouring slowly and carefully. The syrup for my pancakes was the overflow from his plate! He did have fun finding the corn kernels, picking them out and eating them separate from his pancakes.

After supper, Damian dished up the pudding. Devon was busy playing. 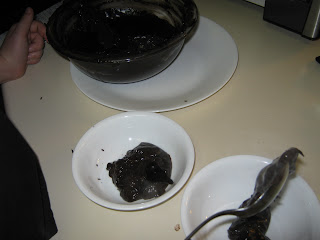 Homemade pudding is so much better than boxed, store-bought stuff. By the way, Bam said this could be made with skim milk but is much better with whole. I happened to have skim and just under a cup of Half’n’half, so I combined them for an awesome result.

You can see Devon sampling his masterpiece at the beginning of this blog entry. 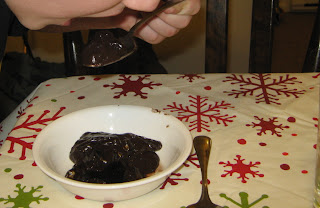 Then he and I experimented, while Devon continued to play. I explained about crepes, thinned the batter a bit, and made my version of a crepe which he filled with chocolate pudding. A fine joint effort to end the evening. 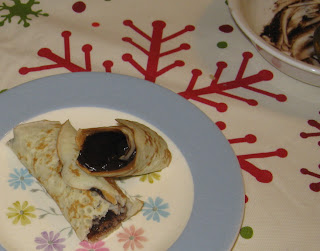 Step by Step in the Kitchen is now on Facebook. Take a look and "Like" the page. I'll be posting extra notes and photos there.

Visit my other blog ~ Corning NY Step by Step, a pictorial view of the City of Corning NY.
Posted by Kathleen Richardson at 3:31 PM