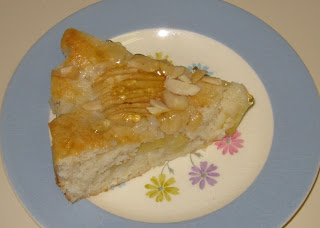 Fall is in the air and so is the aroma of apples, fresh and cooked. It’s the time of year to head to apple farms and pick your own. Then, when you realize you’ve picked way too many, you’ll be looking for new ways to use your abundance of these juicy fruits.

Apple Almond Cake is based on an Apple Cake recipe I found in Woman’s World’s 10/10/11 issue. I picked up a copy of the magazine as soon as I stepped into Wegmans and stood there leafing through the recipes hoping to find one that would inspire me.

I ended up buying ingredients for the Apple Cake and the Chocolate Chip Cookies recipes I found in Woman’s World. I followed the Apple Cake pretty much as directed, with one notable exception. This recipe contains almond extract and slivered almonds, so I decided it was more fitting to present it as Apple Almond Cake.

(Look for the Chocolate Chip Cookies which I intend to refer to as Chocolate Chip-Cranberry Cookies in an upcoming blog entry. Yes, raw cranberries are finally in the produce section! I always buy a couple of bags and throw them in the freezer.)


CLICK ON ANY PHOTO TO SEE AN ENLARGED VERSION. 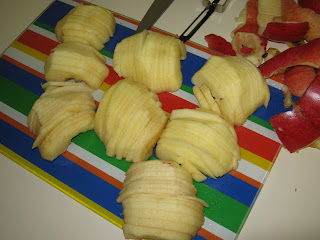 1. Preheat oven to 350-degrees Fahrenheit.
2. Coat 9” tart pan with removable bottom with cooking spray.
...I used a 9” ceramic tart pan and after spraying it with cooking spray, I lined it with parchment paper and sprayed the parchment.
3. Peel, core and halve apples, cut into thin slices, keeping slices together in shape of apple half.
...I found it was easier for me to halve the apples, then core them. 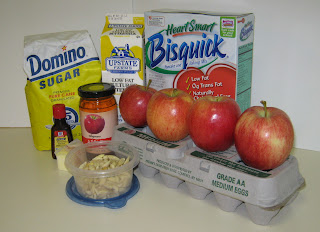 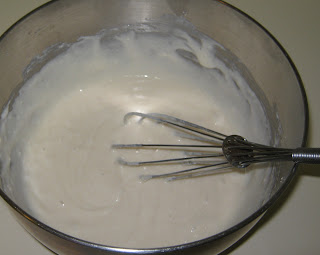 5. Top with sliced apple halves trimming to fit if necessary.
...My apples were small so there was no need to trim. I could have spread them out. 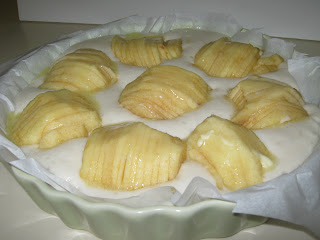 6. Brush with melted butter. Bake 30 minutes.
7. Sprinkle with sliced almonds. Bake 10 minutes or until golden and toothpick inserted into center comes out clean.
8. Cool completely on rack. Brush with apple jelly.
...I placed the apple jelly in a small microwave safe dish and nuked it for about 10 seconds, then stirred. 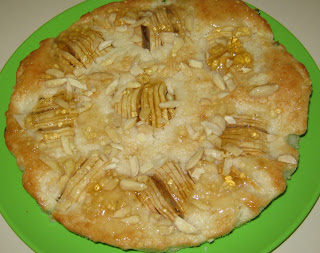 9. To remove side of pan before serving, run knife around edge of cake to loosen.

Every time I’ve used buttermilk in a recipe that calls for small amounts such as this one does, I end up throwing out the rest of the quart of buttermilk. Recently I read that buttermilk can be frozen, so I sprayed plastic ice cube trays and poured the buttermilk in them. Each “cube” is equal to just under 1/8 cup. Once they were frozen, I placed them in freezer bags for future use.

I sampled the Gala apples -- which I purchased at the grocery store -- and found that they were bland but stayed with the recipe. Next time, I think I’ll sprinkle them with lemon juice (which will also keep them from turning brown) and a cinnamon-sugar mixture.

Another variation I want to try is making this an Upside-Down Apple Almond Cake, sprinkling the bottom of the pan with cinnamon red hots (and the almonds) and placing the apples in the bottom in a some kind of pattern. As it was, I could have skipped the parchment and simply served the tart in the pan. Or is removing it from the pan what makes it a tart? 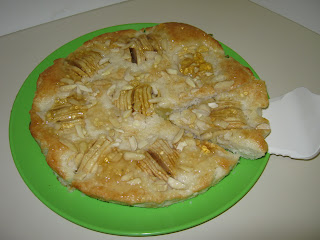 “Like” Step by Step in the Kitchen on Facebook. I'll be posting extra notes and photos there.

Visit my other blog ~ Corning NY Step by Step, a pictorial view of the City of Corning NY.
Posted by Kathleen Richardson at 3:46 PM