Mexican Stuffed Shells are featured so often on Pinterest that I have no idea who originated this delicious recipe. One special change I made was to substitute Boca Veggie Ground Crumbles for my vegetarian daughter. This entree would be equally delicious with ground beef or ground turkey.

My son-in-law is a diehard carnivore but even he went back for seconds! Grandson No. 1 -- age 10 -- is an omnivore, as he puts it. We’ve recently come to realize that my 6-year old grandson is (going to be) a vegetarian. He barely touches meat and he likes most of his foods uncooked. I’m glad to know that both of them -- all 4 of them as a matter of fact -- love their salads and vegetables.

Grandma -- that’s me -- will eat most anything. That’s the way I was raised, but I find as I get older (I do that regularly) I prefer less meat and more veggies. Right now my daughter and I are in the midst of a modified Paleo diet. Meaning we’re pretty much restricting ourselves to meat, veggies and fruit. Because she’s a vegetarian, she ends up adding beans and some grains to her diet to meet her caloric and nutritional needs. I add some dairy because I never ate/drank much of it in the first place, but probably need what I can get to avoid osteoporosis.


Back to the recipe 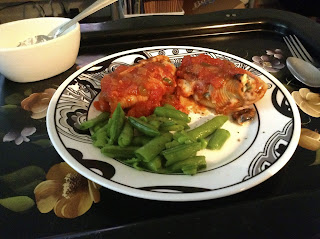 1. Preheat oven to 350-degrees Fahrenheit.
2. In a pan, brown the meat; add taco seasoning and prepare according to package directions.
3. Add cream cheese to meat mixture; cover and simmer until cheese is melted. Stir together and mix well. Cool thoroughly.
4. While meat is cooking, cook pasta according to package directions. Drain. Rinse with cold water. Drain. Set shells on pan or large plate with space between so they don’t stick together.
5. Pour salsa on bottom of a baking pan.
6. Stuff each shell with 1 - 2 tablespoons of the meat mixture. Place them in the pan, open side up.
7. Evenly cover shells with taco sauce.
8. Cover with foil and bake thirty (30”) minutes.
9. Remove foil and sprinkle with onions, olives and shredded cheeses.
10. Bake 10” - 15” more (leave foil OFF), until cheeses melt and mixture is just starting to bubble.
11. Serve with sour cream. If desired, serve with more chopped onions, shredded lettuce and diced tomatoes. Oh, and maybe more salsa!

* Since I was feeding carnivores (meat-eaters) and vegetarians, I substituted Boca Frozen Veggie Ground Crumbles (prepared as directed on package) and everyone was satisfied.
* My daughter had made an ATK (America’s Test Kitchen) recipe the day before and gave me her homemade taco seasoning from that entree. I used it and was happy with the results.
* I used mild salsa and mild taco sauce. Next time I may up the heat a notch in one or the other.
* Recipes I saw called for a 9-inch by 13-inch pan. No! Go smaller so that the finished, stuffed shells touch each other.
* I prefer full-fat cream cheese and sour cream!


Can you believe, next month -- September 2013 -- will be the two year anniversary of Step by Step in the Kitchen. And, I’ll be having my 68th birthday. Love it! You’re never too old for anything... blogging, whatever.

Maybe my creeping-up advanced age is what accounts for the fact that I only got one picture of these marvelous Mexican Stuffed Shells. Or, maybe it was the expected dinner company that threw me off.

So, the pictures are from the next day when I was having leftovers. I duplicated the one and cropped it this way and that, so now there are three views of the same photo! Sorry there’s not more, but check online and like I said, you’ll find lots of versions of this recipe and many great pics. 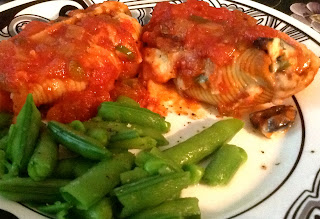 Last but not least, I hope you'll take a few minutes to visit my other blog, CORNING NY STEP BY STEP -- a view of the city where I live.

CORNING NY STEP BY STEP is now on Facebook. LIKE it and you’ll see when I post a new entry to that blog, plus there will be extra photos of people, places and things of Corning, New York that didn’t make it into the blog itself.

Posted by Kathleen Richardson at 1:23 PM