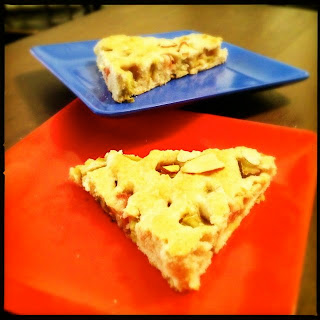 Run to your garden and fetch some rhubarb. If it's past its prime, I hope you remembered to save some of those red and green stalks in the freezer.

Following up on a serious craving for something baked and featuring rhubarb, I got a rude awakening late last month at the supermarket. A little one-pound package of trimmed rhubarb stalks cost $5.99 per pound! No! I will not pay that much.

My daughter, who lives in the country, has a neighbor who grows a massive amount of this vegetable turned fruit with its strong tart taste. Sweetened with lots of sugar, rhubarb is best known as a featured ingredient in strawberry-rhubarb pie.

Anyway, the neighbor told my daughter to help herself to the rhubarb (which she hadn't done), so I hurried over to their house (the neighbor's) and asked if I might pick some. Sure, they said, although they felt it was past its prime. 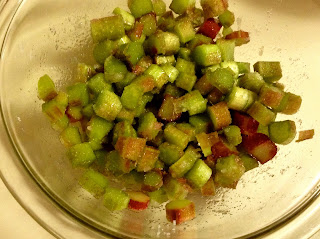 Much as I love pies, particularly strawberry-rhubarb, I wanted to try something new and inventive. Invented by someone else, but new to me, that is. So, I headed to Pinterest, created a Rhubarb Board and did a search on rhubarb. (P.S. You can find me on Pinterest.com at "Kathleen Read Richardson".)

The result was that I found lots of rhubarb photos and numerous promising recipes. I decided to start with one for COCONUT RHUBARB SCONES and then moved on to RHUBARB KUCHEN. Both turned out to be delicious, and I'll be making them again and again. 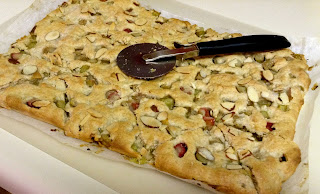 You can find the recipe for COCONUT RHUBARB SCONES at a Toronto food blog called Buttered Up!

* Be sure to add just a little sugar to the rhubarb as directed in the beginning of this recipe. Stirring in all of the sugar early on will draw too much liquid from the rhubarb and will produce a soggy product.

* One change I made... after lining a baking sheet with parchment paper (Don't you just love parchment paper!), I spread the mixture over the entire pan, making one giant scone. Once they baked and cooled, I used a pizza cutter to cut them into triangles. 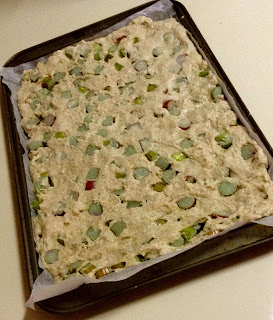 * I still set the oven at 425-degrees Fahrenheit. It took 25 minutes to cook. Depending on your oven, the temperature might need to be lowered and/or the cooking time lengthened or shortened.

* Slivered almonds may be sprinkled on top before baking. Pat them gently to set them in place.

RHUBARB KUCHEN comes from Donalynn at The Creekside Cook and this recipe fills two 8 or 9-inch pans. I eventually ate my way through one (really, I shared it!) and one awaits my pleasure in the freezer. 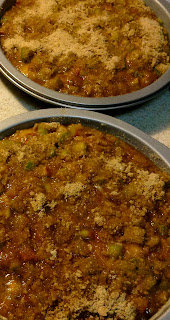 * Unlike the Coconut Rhubarb Scones, you'll be adding all the sugar specified to the rhubarb for a syrupy filling. 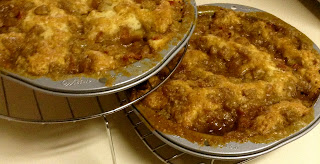 ITALICS..................
One more hint when making either of these rhubarb delights... Keep a small metal nail file and a nail brush by your kitchen sink. You'll need both for cleaning under your nails.

Posted by Kathleen Richardson at 11:28 AM