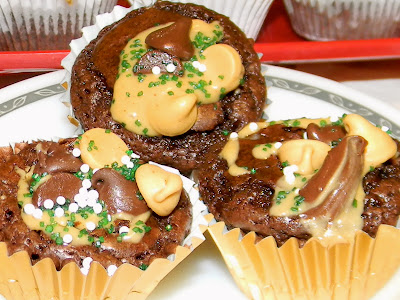 Peanut Butter Cup Brownies... that may be slightly misleading, or a slight misnomer, take your pick. What makes them pb “cups” is that peanut butter is poured into an indentation in the top of a chocolate brownie. Then they are topped with peanut butter chips and chocolate chips. Oh, come on, can there be anything better than that? Well, maybe the real Peanut Butter Cups by Reeses. But we won’t go there just at this moment.

I'm giving credit to Baked Perfection for this dreamy, creamy recipe. She in turn gives credit to a couple of other sites, but I’ll let you read about it in her notes. Meanwhile, if you are fans of “Grey’s Anatomy”, think McDreamy and McSteamy, put them together, and then imagine... Okay, I think you’re getting the idea! 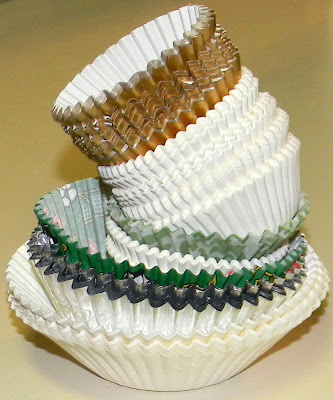 No change in the ingredients in the original recipe (Baked Perfection’s version), but I did end up sprinkling green decorator’s sugar and white nonpareils on top in honor of the approaching Christmas season. 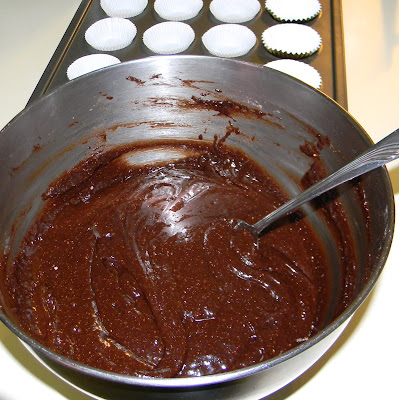 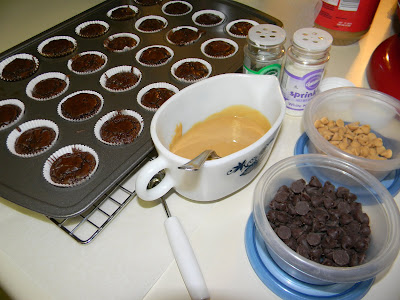 3. Bake 13-15 minutes or until top is set and a toothpick inserted into center comes out slightly wet.

4. Remove from oven and wait for centers to fall (or not; or do it yourself).

5. Microwave peanut butter for 20-30 seconds. While brownies are still warm, spoon about 1/2 tsp. into center of each brownie. Top with chips. Cool completely in pan (unless using papers; then okay to remove before decorating) 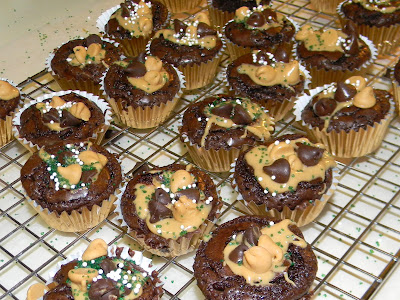 *BP suggested heaping 1/2 teaspoon batter per brownie. I ended up using 1-1/2 tablespoons each, which meant I had to up the baking time. I went for her maximum, then tested them and went a few more minutes, and so on, till they were ready. I ended up with 48 Peanut Butter Cup Brownies!

*Almost immediately I took them out of the pan and left them on the cooling rack with a large piece of parchment paper underneath to catch drizzles and drops.

*I realized after the first batch that I should have cooled them a bit longer before adding the peanut butter and chips ‘cause everything was melting together. The melted pb should be cool (lukewarm), too!

*After realizing that mine weren’t going to have a sinkhole, I first experimented with pushing the top in with a small melonballer. Then I decided to just drizzle the pb back and forth across the top, so no hole. Ended up doing it both ways, equally easy.

*I used mini cupcake papers, so no greasing problems. After they’d cooled a bit, I tried one (well, two) (three?)(they’re small!). Most of the brownie comes out of the paper, but some of it stays stuck. I’m not shy. I turned the paper inside out and ate out the remainder. Oh, my! 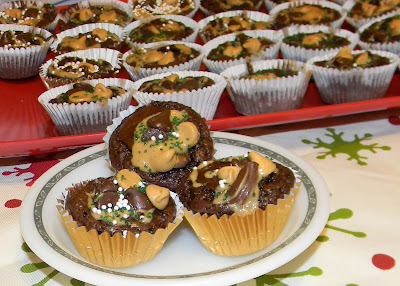 I took the inexpensive way out this time and bought the store brand (Wegmans) brownie mix and went to their bulk section for the chocolate and peanut butter chips.

The peanut butter? My favorite -- Jif. The sprinkles? Wilton.

Let me know how these came out for you. Looks. Taste. Time to bake, etc.

Posted by Kathleen Richardson at 4:26 AM