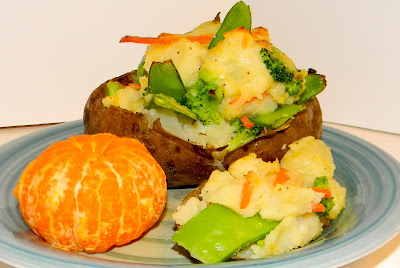 What wouldn’t you give for an fairly inexpensive, healthy and absolutely delish food that would please every eater! Something that requires the least bit of preparation.

Eat with a fork or your fingers. Yep, Gruyére-Stuffed Baked Potatoes are finger-licking good. Even your diehard meat eaters will be asking for seconds.

The basic requirements for Gruyére-Stuffed Baked Potatoes are

* baking potatoes
* vegetables, washed, cut up and lightly sauted
* any cheese, shredded. (I chose to use Gruyére, so I got to name the recipe!)

Step 2 - While the potatoes are baking, cut up vegetables and just barely cook in a pan on the stovetop. I cook them all together in one pan, starting with the ones that take longest to cook. When they are almost done, I add the others. Season with kosher salt and freshly ground pepper.

Step 3 - When potatoes can be easily pierced with a paring knife, remove from oven using pot holders. Leave oven turned on. Place each potato on a dish to see how it “sits”, then cut off a long piece from the top. Scoop out the potato, leaving enough so it can hold its shape.

Step 4 - Mash potatoes with masher or fork. Mix with salt and pepper to taste, plus oil or butter, till preferred consistency. I mix in EVOO and nutritional yeast for a buttery taste. Gently mix in the vegetables and shredded cheese of your choice and scoop the mixture back into the potatoes, piling it high.

Step 5 - Turn oven to broil. Place potatoes in broiler proof pan. Broil 3-5 minutes, or whatever it takes to brown the tops.


For each potato (approximately 10 ounces, or 300 grams, each), I used 1/4 cup small pieces broccoli, 4 halved snow peas, 2 tablespoons shredded carrots and a heaping 1/4 cup of shredded Gruyére cheese. That also allowed me to stuff the tops (remember those strips I cut off the top of the potatoes?). 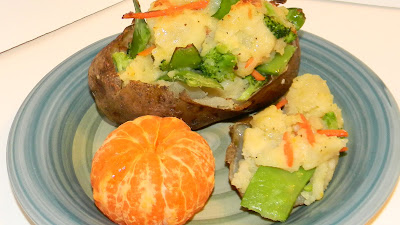 The Gruyére is pricy, but so-o delicious! According to Dictionary.com, Gruyére is a firm, tangy cheese, named after Gruyére, a district in Switzerland, where it was first made.

My strategy when shopping for ingredients for any recipe requiring cheese is to ask my supermarket for a taste of the cheese. Sometimes I get other recommendations after stating how I’ll be using it. I listen to my knowledgeable “cheese person” very carefully.

Posted by Kathleen Richardson at 2:01 PM