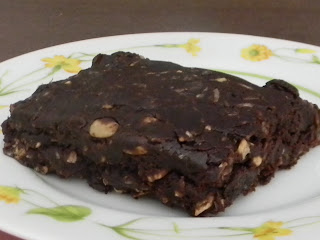 Haven’t you had enough of chocolate? Isn’t it time for a break? Not a complete break. Just a short foray on the wild side. Maybe “wild” is a little much for this brown floury powder that comes from the carob bean. But it is definitely different from chocolate, even though often touted as a “substitute for chocolate”.

If you think carob will taste like chocolate, you will be sorely disappointed. If, however, you are willing to expand your thinking and shake up your taste buds, you quite possibly could take pleasure in a new epicurean adventure.

Back in the mid-1980s, I had a baby. My girl -- twelve years after my boy. Not that it’s really relevant to the carob issue. It’s just that around that time I started experimenting with “whole foods”, thanks to La Leche League, the guru of breastfeeding.

Back then, my now-raggedy hard copy of Whole Foods for the Whole Family (1981 edition) was THE cookbook in my house for trying out a more healthy style of eating. I had a rough start. Imagine whole wheat rolls that could break a window, knock out a burglar, or substitute for a missing baseball.

So, one of the ingredients I discovered (and this was before I was hooked on chocolate) was carob. Powdered carob. Carob chips. Carob chips that looked just like chocolate chips and came in sweetened and unsweetened varieties. I once presented my little girl (now a 27-year old mother of a 9-year old and a 5-year old)with a handful of UNsweetened carob chips and she gobbled them up. Never would touch the sweetened ones. 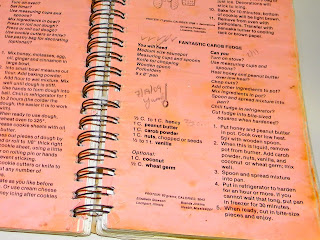 The original Fantastic Carob Fudge recipe comes from my Whole Foods for the Whole Family cookbook. I’ve made it many times, though not so much in recent years. Occasionally I wrote down dates in the cookbook. Note the 2009 date written on the left. Also, at the top left, check marks each time I made it. And on the right is the long ago date of 2/91. Wow, 21 years ago!

It’s 2012 and time for another taste. Every time is different because every time I seem to have different ingredients available and so I’ll share my changes along with the original recipe. 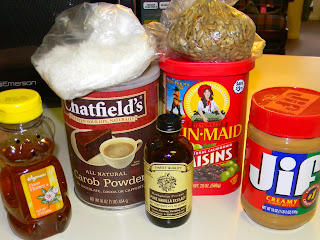 1/2 cup to 1 cup honey (I started with 2/3 cup and added 1 tablespoon more after mixing in the other ingredients)
1 cup peanut butter
1 cup (unsweetened) carob powder
1 cup nuts, chopped or seeds
1/2 to 1 teaspoon vanilla (I always go for the higher number when it comes to vanilla)

1. Put honey and peanut butter in pot. Cook over low heat.
2. When this is liquid, remove pot from burner. Add carob powder, nuts, vanilla, and coconut or wheat germ; mix well.
3. Spoon and spread mixture into pan
4. Put in refrigerator to harden for an hour or more. If you cannot wait that long, put pan in freezer for 30 minutes. 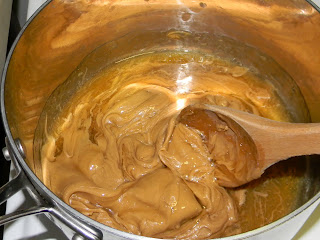 My changes (this time)...
*I had only 1/2-cup of sunflower seed kernels and added them.
*I also had only 1/2-cup of UNsweetened coconut left over from another recipe, so I tossed that in, too. Sweetened coconut would be better.
*No wheat germ in the house, but there is wheat bran. Not sure of its effect on the human body if large amounts are used, so I only added 1 tablespoon.
*I added 1/2-cup of raisins.
*As I stated above, I added more honey after mixing everything in.

After the fudge was refrigerated, as I do every afternoon I put on the water for a cup of EnglishBreakfast-EarlGrey tea, with a little skim milk stirred in. Yes, I know the tin says English Breakfast. I buy one tin of each, mix the loose leaves together in a bowl, then divide the mix between the two tins. 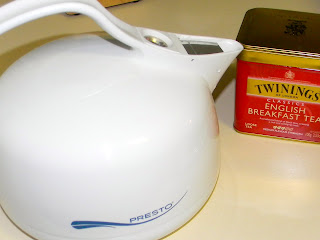 Hey, look what I found out about CAROB and your dog...

Carob does not contain theobromine, an alkaloid found in chocolate which is toxic to some pets and can be fatal to dogs and cats. This is why carob is used to make chocolate-flavored treats for dogs.


Posted by Kathleen Richardson at 4:13 PM