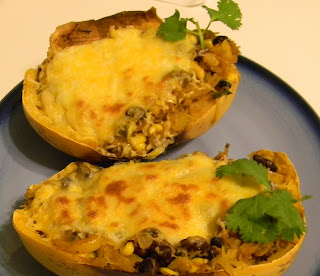 My only argument against cooking with any kind of fresh squash is that it’s so difficult to cut into, or to peel. Well, thanks to BevCooks.com, I not only now know how to get into a squash via the easiest way in the world, but also I have a new and (personally) tried and true recipe to add to my 3-ring binder.

I’m not kidding about the squash. Whatever kind I’ve used -- butternut, acorn, spaghetti squash -- each time I’d try a different method of peeling, cutting and baking. None was satisfactory. Until now.

Bev Weidner, blogger extraordinaire, makes it simple. I’ve tried her idea for spaghetti squash, as used in Southwestern Stuffed Spaghetti Squash and next time I cook another kind of squash, I’m going to try the same method. 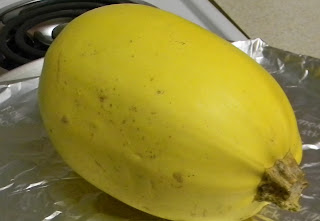 Bev did not peel, cut, nor de-seed her squash. She simple (after washing the outside of it, I assume) stuck it in a preheated 375-degree Fahrenheit oven. Cooked it for 50 minutes, then took it out and let it cool for 30 minutes. After that, it was easy to cut in half, remove the seeds (I used a grapefruit spoon) and pull out spaghetti-like strands with a fork. 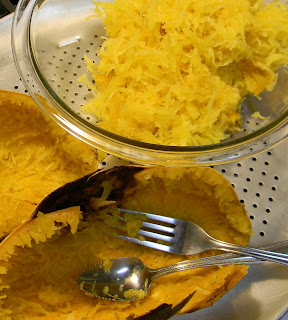 I’m guessing I could use the same cooking method with butternut or acorn squash, and after removing the seeds, if I want to have a cubed version, I could maybe use a melon baller. Anyone else have thoughts on this? Let’s make life easy! 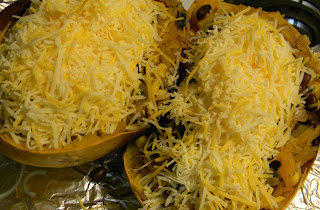 My daughter and the grands (4 and 8) helped me eat the Southwestern Stuffed Spaghetti Squash last night. I cooked the squash and prepped everything else earlier in the day, then we took the boys to Barnes & Noble to use their Christmas gift certificates.

Assembling and warming the final product didn't take long. Corn (tortilla) chips were great for scooping with occasional help from forks and little fingers. Everyone was delighted with the tastes and textures.

Daughter suggested sour cream for next time (ah, next time!). I like to keep plain Greek yogurt around and it would have been a tasty topper, but this time I only had vanilla Greek yogurt. Doesn’t matter, the boys added it anyways!

Again, thanks to Bev Weidner at BevCooks.com. And a reminder, if you want to make this dish, go straight to Bev's blog and you'll find her complete recipe for Southwestern Stuffed Spaghetti Squash.

Step by Step in the Kitchen is on Facebook. Take a look and "Like" the page. I'll be posting extra notes and photos there.

Visit my other blog ~ Corning NY Step by Step, a pictorial view of the City of Corning NY.
Posted by Kathleen Richardson at 10:48 AM