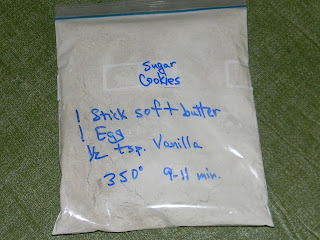 Monday, I think it was, when the weather was so-o hot and humid. I wanted to bake, but didn’t want to risk turning on the oven and making the entire (upstairs) apartment any hotter than it was.

As I wandered around Pinterest, I came across an idea for making cookies mixes -- dry ingredients only -- and thought to myself: Aha, a way to cook (kind of) without actually cooking! You can see the actual blog post itself at FAKE IT FRUGAL.

Now you’re probably wondering why I titled this blog post Organized Kitchen, Organized Cookie Mixes. It’s because organization fits in with my cookie mix adventure. After I’d made two bags of each of four kinds of cookies...
* Chocolate Chip (I used chocolate chunks)
* Sugar
* Oatmeal Raisin
* Gingerbread
I needed some place and some way to store them. Well, I really do intend to give my daughter some of the duplicates for her boys, but in the meantime, I needed a way to gather them up.

Tuesday I went shopping, at Wegmans of course, and while there came across a cute basket of just the right size for $1.29. 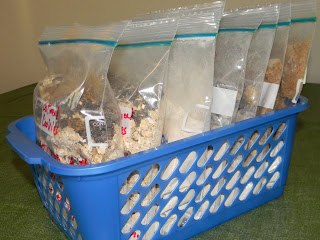 I’ve been reading a couple of blogs about organizing your home. Wish I’d found the great organizing ideas on them years ago, back before I even had a computer.

Now that it’s just me, I don’t have as much to organize as I did when the family was growing...
Me and Hubby #1
Me and Hubby #1 and son
Me and son and apartment-mates (another mother and son)
Me and Hubby #2 and my son and his three kids
Me and Hubby #2 , my son, his three, and our daughter
Me and daughter (son flew the coop and made a career in the USAF)

You get the idea. We needed so badly to have some kind of systems set up.

Fast forward to the present. I’ve been reading ORGANIZING MADE FUN and I (HEART) ORGANIZING and was inspired to buy baskets and little white racks.

Plates, bowls and glasses are so much more organized now that there are two racks instead of high stacks of plates. 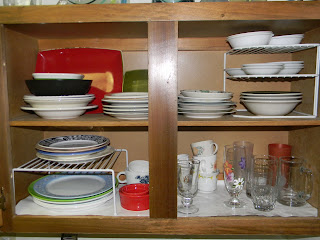 I keep medicines in the kitchen; bathrooms are often too hot and humid. That’s the basket on the top shelf. The bottom shelf has the rack, with a basket of herbs beneath it and spices on it. 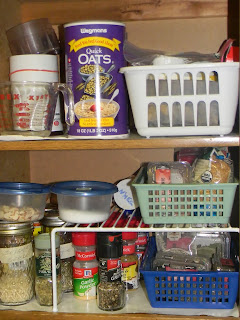 This lower shelf was organized before I added the rack, but that meant I had to remove the whole stack if I wanted something on the bottom. 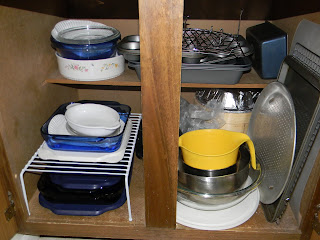 Another lower shelf. The black case is a hand mixer that I used to place upright on the right, with the basket of oils and vinegars beside it. It was awkward and when I wanted one of the bottles I had to lean way down (or squat -- awkward!), sometimes having to remove the mixer to pull the entire basket out to reach something in the back of it. Now that the rack is there, I stored the rarely used hand mixer at the lowest level and placed the basket on the top where I can easily slide it out. 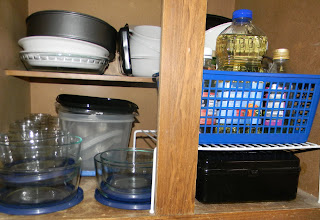 I’ve organized other areas of my apartment, most notably a huge closet in the front room, but we’re sticking to the kitchen and maybe you’ll get some good ideas -- or give me some!

LIKE Step by Step in the Kitchen on Facebook. I'll be posting extra notes and photos there.

Posted by Kathleen Richardson at 5:19 PM